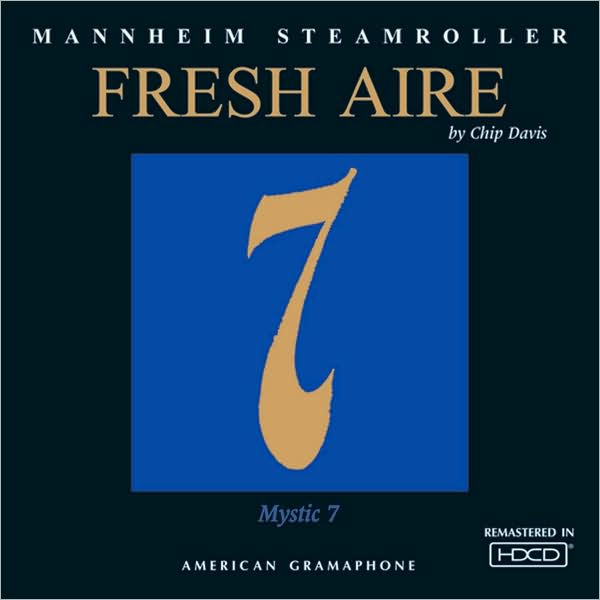 The 1992 New Age Grammy went to Chip Davis and his Mannheim Steamroller group. Fresh Aire 7 is a concept album about the number seven. It’s well naff.

When you take a deep dive into an unfamiliar music genre, you discover entire worlds you never knew existed. Up until a few weeks ago, I’d never heard of Mannheim Steamroller. But it turns out they’re quite a big deal. They’ve released more than 70 albums, and people seem to go nuts for them. Nine of their albums went Gold, three went Platinum, and four went multi-Platinum. What the ‘ell?!

I first met them during the 1991 Grammy Awards, when their Yellowstone album got a nomination for the New Age gong. I described that collection as “pure Disneyland”, but not necessarily new age. But in listening to it, I discovered Mannheim Steamroller’s formidable back catalogue, which I was delighted to find contained a number of Halloween albums.

Of course, I listened to the first in their Halloween series. 23 tracks, “deranged by Chip Davis”! It’s a strong contender for the strangest album I’ve ever heard. The first half contains a number of seasonally-appropriate classical compositions arranged for affordable synths. Toccata in de Mole, The Hall of the Mountain King, The Sorcerer’s Apprentice, Night on Bald Mountain – that sort of thing. None of them sound particularly good. It’s certainly unnerving, but not necessarily in the way they intended. It’s uncanny, like a robot humming to itself in the oil shower. But halfway through its mammoth 90 minute run-time, the album transforms into one of those Halloween sound effects records. There’s over 40 minutes of creepy ambiance that includes a long spell spent on an alien spaceship. It’s quite the tonal shift.

The album’s bizarre, and about as far away from cool as it’s possible to get – which obviously makes it an essential listen. It’s definitely going to become a staple of future Halloweens. And as we enter the festive season, I’m looking forward to listening to the group’s Christmas albums. The first two in the series went 6 x Platinum. It’s likely that there are people out there who simply couldn’t imagine Christmas without Mannheim Steamroller. Like I say – a whole world that I never knew existed.

But today, we’re focusing on Fresh Aire 7 – the seventh album in Mannheim Steamroller’s Fresh Aire series of albums, and the winner of the 1992 New Age Grammy. It’s every bit as naff as that Halloween collection, but is it any good? And more importantly, is it new age? 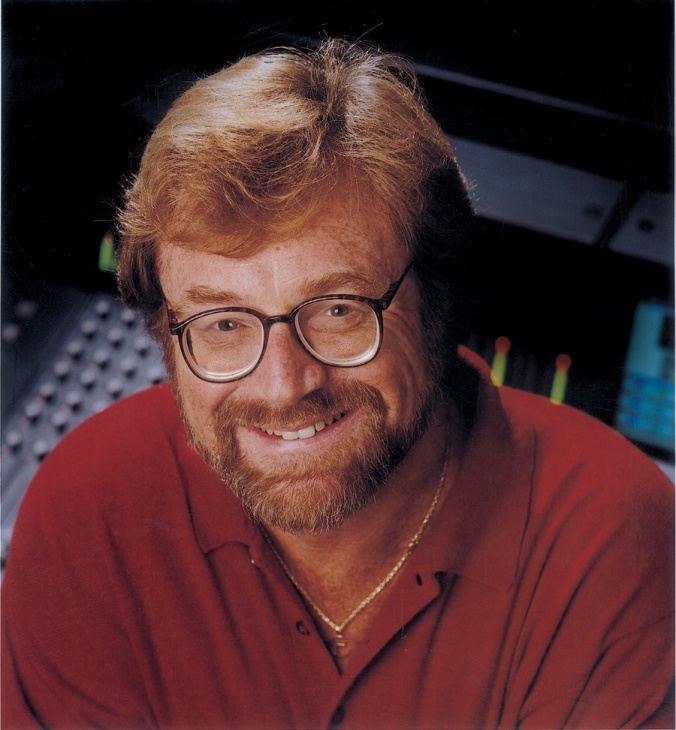 We’ve already met some singular figures in this new age odyssey. But I struggle to think of any other musician who’s had a career quite so unorthodox as Chip’s. As well as selling millions of holiday albums, Chip was also partially responsible for that C. W. McCall Convoy song. He’s made music for nature documentaries, and special concept albums to soundtrack cooking, coffee breaks, romantic evenings, and dinner parties. He’s applied his signature blend of light jazz and classical arrangements to the music of Disney, and he’s even appeared in a couple of Thanksgiving Parades. He was honoured in The Simpsons as a character who, despite never appearing onscreen, nonetheless touched everyone’s lives in some way.

And it all started with the Fresh Aire series. They’re all concept albums. The first four focus on the four seasons. The fifth is all about the moon, and the sixth explores Greek mythology. Fresh Aire 7, for which Chip would win the new age Grammy, is dedicated to the “Mystic 7”. The album touches upon the stars in the sky, the chakras of the body, the colours of the rainbow, alchemy, and the seven seas. So even if the music doesn’t exactly sound new age, the album still explores some very new age ideas.

And how does it sound? Naff. Profoundly naff. Stately orchestral arrangements paired with tasteful light jazz as played on early 90s keyboards. But it’s always earnest, and almost playful at some points. It’s the exact opposite of cynical. Take it on its own terms and it might work to remind you that people, and the world, can be lovely sometimes.

But there’s no denying that this is ridiculous music. The opening track, Conjuring the Number 7, sounds almost identical to the theme from Knightmare. It’s rollicking adventure music, and this fan-made video looks like something from a psychedelic Sesame Street:

Sorry, I should have warned you. The preceding video contained flashing images and should have not been watched by anyone with a history of epileptic seizures.

Sunday the 7th Day is a pompous regal march for a clownish king. It’s probably the music Boris Johnson hears in his head during his morning ablutions. The 7 Metals of Alchemy has that neon-soaked “cocktails and detectives” vibe that’s apparently endemic to late 80s/early 90s new age music. The album’s dominated by a seven-part suite celebrating the seven chakras of the body, and some parts of it sound like the sort of music a post-modern deconstruction merchant like Saint Pepsi or James Ferraro might distort to make An Important Point about capitalism, or something.

My point is, this music is naff enough to dissolve metals. It’s cheesier than a Spanish four-cheese pizza dipped in a three cheese fondue blend, with extra cheese. But it’s so much better for it! Because apart from anything else, this music is friendly. Endearingly so. It’s actively trying to make you feel positive. Listen with a wide-open mind, and it just might succeed.

Things get very good towards the end. A choir enters the mix on Chakra 5. After a series of bombastic, maximalist excursions into deep cheese, suddenly all we hear are mysterious voices and occasional synth chimes. Chakra 6 has a similarly austere feel, and taken together, these two tracks evoke a misty monolith in the middle of winter woodland – something still, foreboding, yet peaceful, like a goddess sepulcher coated in vines.

Chakra 7 almost breaks the spell – it starts as another whimsical slice of new age quest music. But then, halfway through, we return to the ethereal voices and the chiming synths. It’s like dawn’s breaking, and the sun’s rays are illuminating the engravings on our woodland tomb. Then the last track, The Seven Stars of the Big Dipper, is strikingly beautiful. Poignant, touching, and again – friendly and inviting. Look to the sky, wrapped up warm, with a smile on your face. There’s a whole world out there, and so much of it is wonderful. That’s what music like this does for me. It’s a reminder.

A joyful exploration of numerous esoteric themes, and music that sets out to make you feel good, and succeeds. Fresh Aire 7 is very much new age music – a deserved win, in my book. Good work, Chip.

When people think unfavourably of new age music, they’re probably thinking of the likes of David Arkenstone. He’s a craggy viking wrestler sort of gentleman with luxurious grey hair. He’s mainly known for his World of Warcraft music, but also responsible for dozens upon dozens of releases with names like Fairy Dreams, The Fairy Garden, Celtic Garden, Celtic Chillout, Celtic Romance, Chirstmas Panpipes, Spirit Wind and Journey of the Whales. Everything you think you hate about new age music you’ll find in the back catalogue of David Arkenstone.

His 1991 album, In The Wake of the Wind, was nominated for the New Age Grammy. It’s best described as “fantasy ambient”, and I absolutely love it. Several pieces from this album were used to soundtrack optimistic visions of the future at Disney World’s Epcot Centre. Fitting – this is music for wide eyed wonder. Watch me get extremely into David Arkenstone now. Like Mannheim Steamroller, he has a number of festive releases. I can’t wait to have a new age Christmas!

Ottmar Liebert is a German guitarist who plays in a Spanish style. He got his start selling his CDs in a Santa Fe art gallery, and he’s now an ordained Zen monk. So there’s a few new age credentials for you.

Borrasca is a collection of chilled yet sprightly “nouveau flamenco” workouts for the acoustic guitar. I have a lot of respect for this sort of music, and I admire Ottmar’s deft, lyrical playing. But this one was already starting to feel samey by the middle of the second track, and much of the rest of the album just washed right over me. There were some distinctive moments – like that seductive midnight sax in Twilight in Galisteo – but for me, this album was more admired and appreciated than enjoyed. Maybe I just wasn’t in the mood.

We previously met Suzanne Ciani at the 1989 Grammy Awards. I wrote that that year’s Neverland contains “the sort of piano that could reduce me to a shuddering lump.” Hotel Luna is largely the same – a series of painfully emotive solo piano performances. But there are some more playful tracks, too. Try Rain, embedded above. It transforms some dreary afternoon drizzle into a something sparkly and spellbinding. Italia is another standout, and on YouTube it’s accompanied by helicopter shots of various Italian locations. Another life-affirming inner journey, another hungover moment of tearful clarity – it’s the Landscape Channel all over again.

Finally, 1992 marked the first of a few New Age Grammy nomination for Tangerine Dream. I’ve been a huge fan of these guys for a while now, and I’ve never thought of them as new age. The Grammy shortlisters seem to consider any instrumental synth music to be new age music – even Jean-Michel Jarre got a nomination in the inaugural awards. But this particular album, Canyon Dreams, takes influence from Native American musical forms and was recorded to soundtrack a “scenic video film about the Grand Canyon”. So yeah, I can see why they’d classify this one as new age.

I’m all about Tangerine Dream’s early kosmiche. I’ve barely scratched the surface of their post 1981 work, for two reasons: First, there’s rather a lot of it. Literally hundreds of albums. Second, all that I have heard has been more than a little… unremarkable?

Canyon Dreams, though, is quite special. The first track, with its rhythmic panpipes, is a challenging hurdle. But beyond this it’s largely a collection of hushed, spacious atmospherics, where mournful synths gel beautifully with more organic reed and wind sounds.

As tributes to canyons go, it’s not a patch on Paul Winter’s masterful Canyon. But as post-Virgin Tangerine Dream albums go, this is surprisingly, refreshingly good!