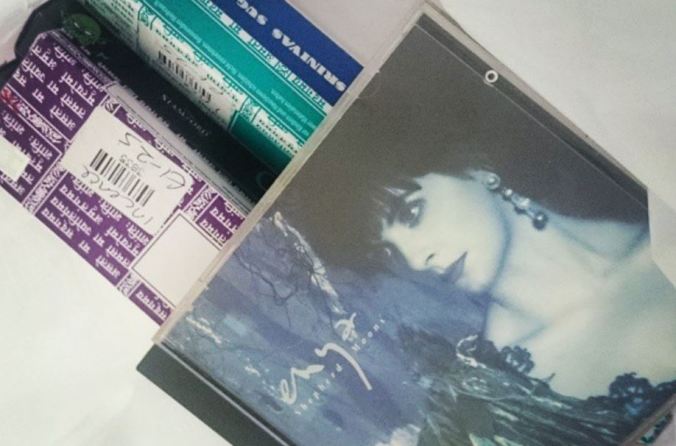 All the usual suspects are there. Enya. Laraaji. Iasos. Constance Demby. I’ve got a lot of more obscure stuff too, plus a few compilations. Among those is Light in the Attic’s astounding I Am The Center collection, which I hold responsible for getting me into this New Age thing in the first place.

Some of this music is self-consciously New Age music – as in, the artist themselves said “this is New Age music!” Some of it is music that I myself have labelled as New Age. You might disagree with some of my labelling.

Some of this music was specifically recorded to aid meditation or to soundtrack rituals. I’ve got some excellent recordings of Tibetan singing bowls, for example. Some of this music was created for specific occasions or spaces. But some of it is simply ambient music with a worldly, spiritual or “ethnic” feel to it.

It’s not just that it’s blissfully naff. So what else could it be?

I’ve been reading Martin Green’s Prophets of a New Age. I bought this book in the hope that it would help me understand this whole New Age thing a little better. And it has!

Green begins by identifying three mental models for viewing society and the wider world. No model is inherently “good” or “bad”, and he implies that a combination of the three is necessary for the world to function.

First is the authoritarian model. Those who think in these terms respect strength, tradition, nation, family, and other monoliths. Then there’s the systematic model, which is marked by a respect for bureaucracy, theories, order, and yep, systems.

Green describes the third model as “naive”, but he immediately makes it clear that in using this word, he doesn’t mean to imply that these people are gullible, credulous, or misinformed. Instead, he uses the word “naive” to describe a sort of open-mindedness. These people are the most willing, and the most likely, to look beyond established norms and experiment with alternative ways of thinking and living. So of course, New Age thinking is a product of the naive mindset.

Green’s book is subtitled Counterculture and the Politics of Hope. It’s a long exploration of the utopian visions, ideas and experiments that tend to flourish at the turn of each century. He touches upon feminism, pacifism, vegetarianism, and the symbolism of sandals. He discusses the lives and the writing of Tolstoy, Gandhi, Chesterton, Ruskin, and Le Guin. Garden cities, communes, nature cures, the occult – it’s all here!

The book was written in 1992, as we approached another turn of the century, and the start of a new millennium. While looking at late 18th and 19th century New Age ideas, Green constantly looks for modern counterparts from the late 20th century. Examples include Greenpeace, CND, the AIDS crisis and the corresponding call for gay rights and recognition.

Green dismisses the sort of thing you or I might think of as “New Age” as “crystals and candles”. All that transcendent music, all of those dreamcatchers, all of that incense, and all of those dolphins – for Green, they’re merely a caricature of countless important social movements.

To be New Age, it seems, is to take steps to shape the world into something different, something better. It means living by example. So how did the term become synonymous with crystals and candles?

Honestly? I think the Grammys may be responsible. If that annual award ceremony didn’t create the link in the first place, they certainly helped to cement it. Because in 1987 they introduced a whole new category: The Grammy Award for Best New Age Recording. The category remains to this day, though now the award’s given to the Best New Age Album.

Writing in 1987, journalist Steven Rea claimed that the introduction of this category was a “coming of age” moment for New Age music. Rea clearly isn’t a fan of this music, but his snark illustrates my point nonetheless:

In the last few years, new-age has moved from alternative sales outlets – metaphysical bookshops and health-food stores – to the bins of major retail chains, including Tower, Sam Goody’s and Listening Booth. There are new-age music videos, a weekly new-age show on MTV’s VH-1 network and a host of new- age radio programs, including National Public Radio’s Music From the Hearts of Space. Last year, new-age subsidiary labels were launched by six major record companies.

This music was once the reserve of “metaphysical bookshops and health-food stores”! In such places, it was presumably sold to aid with meditation, spirit cleansing, astral projecting, and other tenets of a certain branch of mid-century New Age thinking. I don’t know how you’d begin to sum up this particular branch of the mid-century New Age, but I think you’ll struggle to find a better spokesperson than Iasos here:

In this short 1979 documentary, Iasos describes his music, his worldview, and his vision for the future. It’s fascinating stuff – his New Age sounds lovely – and his laugh is delightfully infectious.

But this is a New Age vision! It’s not the New Age! And yet, once the Grammy Awards officially recognised the genre, this strange music was no longer the soundtrack of a certain line of New Age thought. It became New Age itself.

The Extinction Rebellion, the trans rights movement, Silicon Valley Transhumanism, the clean eaters and the advocates of mindfulness and Hygge: These are all attempts to rethink all that we take for granted, and to change the world for the better. By Green’s definition, these are all examples of modern New Age thought. Yet, thanks to the Grammys, when people think of New Age they still think of head shops, hemp clothing, and a certain sort of music.

But I repeat: What makes this music “New Age” instead of, say, naff ambient?

Rea is absolutely no help at all here. Here’s his description of the sound of New Age music:

Under the umbrella of new-age comes music that is acoustic, electronic, jazzy, folky and incorporates classical and pop elements, Eastern and Latin influences, exotic instrumentation and environmental sound effects.

That could describe basically any music, really. Thanks, Steve.

Having identified the New Age genre as a Bad Thing, Rea proceeds to talk to a few people who share his disdain. Local DJ Peter Bryant apparently hosted a New Age program twice a day, but even he hates the whole thing:

In the circles I come in contact with, people working in music, ‘new-age’ is almost an insult: It’s a belittling term. . .  When I hear the term ‘new-age music,’ I think of very vapid, dreamy kinds of dull music. Things that go on and on and on with no substance or form or interest, and certainly there’s an awful lot of that around.

Well, even if it’s not a glowing endorsement, we’re at least a little closer to the definition here.

Somewhat sadistically, Rea also talks to some of the artists who aren’t happy to have been labelled New Age. Harold Budd says the mere mention of the term “New Age” makes him reach for his revolver. “I don’t think of myself as making music that is only supposed to be in the background,” he said. “It’s embarrassing to inadvertently be associated with something that you know in your guts is vacuous.”

Vacuous background music? Again, not glowing. But it feels like we’re even closer to a definition now!

So is that it? Is New Age music vapid, dreamy, dull, interminable, vacuous background music? Or is it as transcendent as the masters of the genre insist it can be?

It should be obvious by now: I have a lot of respect for genuine New Age thinking. But I have a deep and unironic love for all of this “crystals and candles” stuff. It’s peaceful and positive. It helps me to write, and to recover from migraines, hangovers, and low moods. But much of it also acts as a reminder that there’s a whole world out there. Natural, spiritual, esoteric, whatever you want to call it – all of the horrors you see everyday need not be the extent of your existence.

Genuine New Age thinking could be summed up as “the world is not right but I can make it better.” New Age music might not act as a force of change. But it does reassure me that there’s more to life than this.

I know New Age music when I hear it. It’s likely that you do, too. But I still don’t know what makes New Age music New Age. I still haven’t distilled it to its essence, and I’m not simply going to conclude that it’s the “vacuous background music” that Rea and friends would have us believe.

In doing this, I know I’ll hear a lot of beautiful music. I hope I’ll get to the bottom of what exactly makes New Age music what it is. And who knows? Maybe I’ll find transcendence and enlightenment!