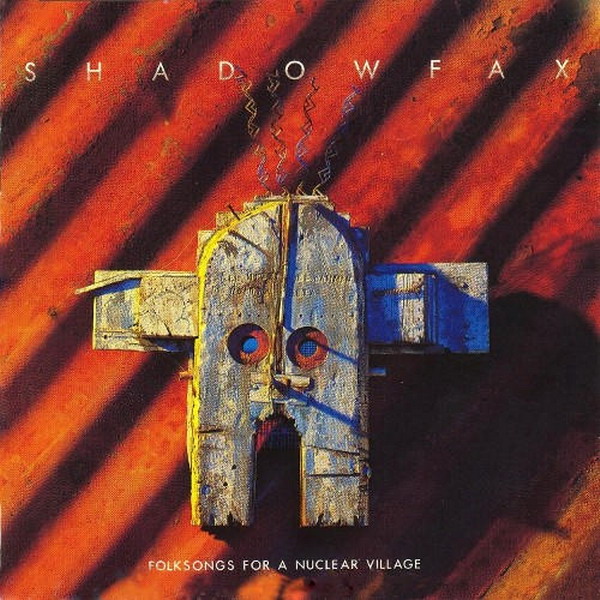 Poor Windham Hill Records. When the Grammy Award for Best Folk Recording was first introduced in 1987, I imagine they started clearing space on the mantelpiece. It must have felt like this new award was created just for them! After all, they were the multi-million selling new age label that may have been responsible for getting the academy to create the new category in the first place.

But despite having two separate label compilations nominated in the first awards, Windham Hill took nothing home. They had a number of horses in the race for the award’s second year, too. Alas, once more, no Grammy for Windham Hill.

Windham Hill missed out on a Grammy at the 1989 awards, too. That year, they didn’t stand a chance: Not a single release from their roster got a nomination. And to add insult to injury? The album that did win, Shadowfax’s Folksongs for a Nuclear Village, was the band’s first album not to be released on Windham Hill!

That must have stung. Many an empty beer can must have been thrown at the TV screen in the Windham Hill office when the 1989 New Age Grammy award winners were revealed.

But what of the album? Was it a worthy winner, or were Windham Hill justified in their (totally imagined by me) contempt? 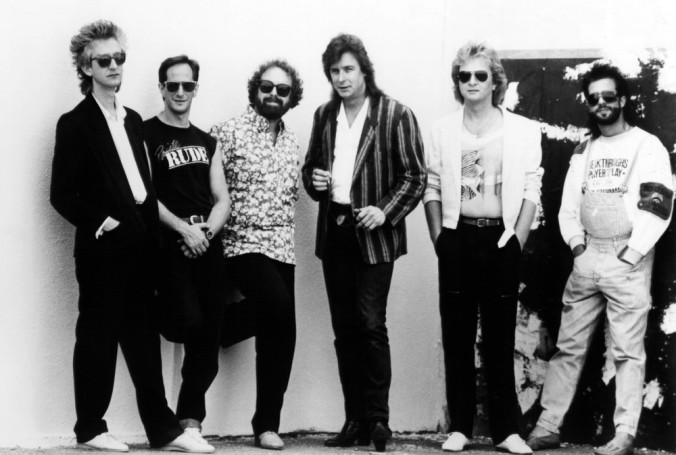 Shadowfax were a folk/jazz fusion band from Chicago. Folksongs for a Nuclear Village was their sixth album, and like I said, their first to not be released on Windham Hill. This is major label new age music! Capitol, no less!

I love that album cover. A mask made of salvaged materials discarded on a corrugated iron surface. It speaks of another world. It’s the sort of image that still pops into my head whenever anyone says the word “art”. For a long time, that’s what “art” was to me. I have early memories of foreboding and forbidding monolithic sculptures – looking at them, or perhaps imagining them, and thinking: Yep, that’s art.

It’s the work of the artist Michael McMillern, and he named it after the opening lines from Dante’s Inferno:

Midway upon the journey of our life
I found myself within a forest dark,
For the straightforward pathway had been lost.

Why those lines for that image? Is this pagan mask a relic from a society that’s lost its way? In playing with forces we don’t understand, are we straying from the straight and narrow to a place of darkness?

Unfortunately, listening to the music of Folksongs for a Nuclear Village, critics could quite easily latch onto the first part of that quote: Midway upon the journey of our life. Because even if I’m being kind, this music sounds like a midlife crisis. It sounds like dinner parties, cocktail classes, and holidays that you insist upon referring to as “expeditions”. It sounds like someone who tells you that they’re not a tourist, they’re a traveller. There’s a difference, darling.

The consensus seems to be that Shadowfax’s sixth album is not representative of their best work. It’s too straight-laced. I haven’t heard any of their other albums, so I can’t comment. But is it even possible for a new age group to bow to major label pressure? Can a new age jazz fusion group really be lambasted as sellouts? Can music this complex really be dismissed as commercial white noise?

The AllMusic reviews are particularly damning. “Clean, inoffensive, boring,” says one. Says another: “Best used as quiet background music that you don’t want anyone to pay attention to, sounds vaguely ethnic without ever disturbing the listener with anything actually happening.” And might I add: Ouch.

Reading those, I’m reminded of the damning definition of new age music I encountered when I first started this listening odyssey: “Vapid, dreamy kinds of dull music. Things that go on and on and on with no substance or form or interest…”

Don’t listen to critics, guys. Maybe compared to Shadowfax’s previous work, Folksongs for a Nuclear Village is too safe, too straight-laced, too boring. Yet I took it on its own terms. And yes, it could soundtrack a midlife package holiday to Borneo. But is that necessarily a bad thing?

Folksongs for a Nuclear Village is defined by two sounds. The first is that of the Lyricon, a sort of synthesizer/clarinet hybrid. It’s played by Chuck Greenberg, who also helped to invent the instrument in the first place. You play it like you would an ordinary reed instrument, but at the touch of a button you can change its pitch, its tone, or even its sound.

Across the album the Lyricon sounds variously like flutes, panpipes, and the sort of exotic reed instruments you might hear on that proverbial package trip to Borneo. Yet no matter how it sounds, there’s always something vaguely digital and synthetic about it. This makes many of the compositions sound overly crisp and processed, but also somewhat overworldly – like a computer singing in the shower.

The faintly-alien Lyricon was such an integral part of Shadowfax’s sound that when Mr. Greenberg passed away in 1995, the group had no choice but to disband. No Lyricon, no Shadowfax. And Chuck Greenberg was the Lyricon. He lived and breathed it.

This banquet of percussion is probably what that AllMusic reviewer was talking about when he mentioned the album’s “vaguely ethnic” sound. But it’s much more than that. It means that every song is driven by a deep burbling harmony of chimes and beats. It means that there are rich textures and seductive rhythms beneath even the most insipid of compositions. And it means that, whenever more standard ROCK drums come in, they hit all the harder – here they’re used for dynamics, rather than simply for rhythmic drive.

So we have a collection of 10 tasteful tunes, deceptively simple arrangements with bright melodies that explode into wildly expressive solos. The production’s about as flat as you might expect it to be, given that this is a late 80s major label new age record. But it’s atmospheric, occasionally engrossing and frequently uplifting.

Highlights? I have a few. Shadowfax are named after Gandalf’s majestic white horse. Lucky Mud has a slight renaissance feel to it, with chiming bell-like percussion throughout. I could picture that faithful steed drinking from a stream in some Middle Earth forest clearing while his wizardly owner sits on a nearby log in deep contemplation. The revelry is disrupted by a few dramatic guitar and drum breaks – maybe the wizard’s thinking about orcs?

Against the Grain has plucked strings and a flute that sounds a lot like the theme from The Saint. It’s a sudden burst of espionage in the middle of an expensive middle age Venezuelan kayaking expedition! If you were looking for something to soundtrack your midnight museum heist, look no further.

Madagascar Cafe is the most vibrant song of the bunch, driven by jaunty strings and accordion, with a lyrical sax solo played over a thumb piano. These pieces were written to accompany a 1982 dance production by Louise Durkee. I couldn’t find any images or videos of the performance, but I imagine that seeing these songs with expressive accompaniment could have been spellbinding.

The album ends with its title track, which features bright strings over a moody future funk groove. I thought of vines creeping across the deserted ruins of a city – nature reclaiming the land after a human catastrophe. This one wouldn’t sound out of place on a Soft Machine album! It’s that good!

Yes, Folksongs for a Nuclear Village is naff. But we’ve already established that this is in no way a bad thing. Maybe it does pale in comparison to their earlier work. But boring this ain’t. And if this represents a career low for Shadowfax, then I can’t wait to explore the rest of their work.

Mark Isham has had a fruitful career scoring films. Blade, Time Cop, Point Break – all his work! In 1989 his Castalia album got the New Age Grammy nomination. And like Folksongs for a Nuclear Village, this was a non-Windham Hill release from an artist often associated with Windham Hill. 1989 was an annus horribilis for those guys!

I’m already familiar with this album. It’s atmospheric jazz fusion with occasional ambient passage, all played by an absurdly talented ensemble. Guitarist David Torn is there, and those warm and melodic basslines are laid down by Japan’s Mick Karn. David Sylvian wasn’t the only man from Japan to explore more esoteric sounds beyond the synthpop.

Guitarist Steve Khan collaborated with keyboardist Rob Mounsey to create Local Color. I’ve not been able to find the full album. The Japanese wraparound on the CD pictured in that YouTube embed above suggests that this one might be a rarity. But what I’ve heard reminds me a lot of Shadowfax: tasteful melodies played over “vaguely ethnic” polyrhythms. It’s pleasant enough, but it sounds even more synthetic, and even less dynamic, than Folksongs for a Nuclear Village. I could see myself getting pretty tearful, though, if I gave these songs a listen when struggling with a certain kind of hangover. Just listen to that piano from the 5:20 mark of Gondolas.

And speaking of the sort of piano that could reduce me to a shuddering lump, Neverland by Suzanne Ciani also got a nomination. A lot of this album sounds like the painfully emotive piano music by Jerry Martin and friends that plays when you build your house in The Sims. It’s a short leap indeed from Build Mode to new age music. The Sims is a gateway drug.

What separates Suzanne’s music from Build Mode in The Sims is the percussion. Mostly it’s gently driving, but you get the occasional orchestral stab too – a booming strike on a timpani to yank you from your revelry. It’s yet more music for an utterly ridiculous adventure, or for another emotional hangover. I love it.

Individual songs were still eligible for the New Age Grammy nomination in 1989. The only song nominated that year was Down in Belgorod by our old friend Paul Winter. If you remember, his breathtaking Canyon album was nominated for the very first New Age Grammy.

Here Paul’s astoundingly lyrical sax is paired with a funky slap bass rhythm and the joyous singing of the Dimitri Pokrovsky singers. Put it on loud and everything that’s bothering you – from intrusive thoughts of the blustering clown in parliament to the unpleasant memories of inferior music – will dissolve like husks of sugar in the rain. It’s magical.

NEXT TIME ON NAGCHAMPA – Peter Gabriel! And ENYA!!!!!