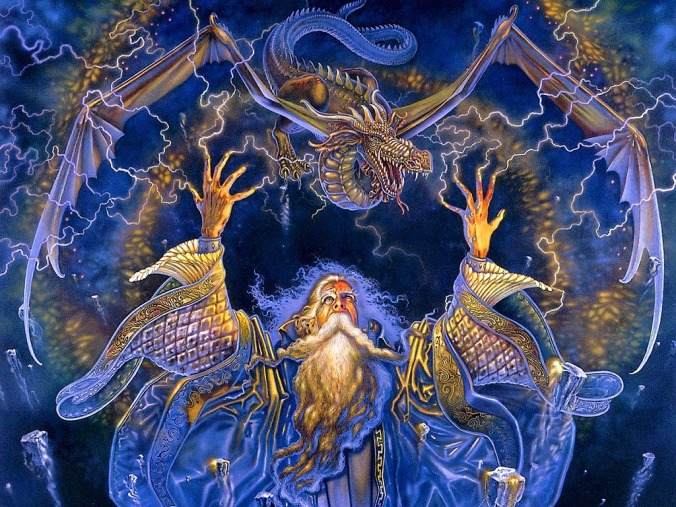 Can I shock you? I love prog rock.

This much-maligned genre delivers songs like symphonies and albums like Chinese puzzle boxes. Structures to get lost in and lyrics you can chew on. It’s colourful, expansive, visionary, and oh so beautifully naff.

Today I’d like to talk about a concept that I call Ultraprog. This is where a prog rock song just pushes itself that little bit further. Intensity builds. Maybe the tempo increases, or the band introduces a particularly fiddly riff. Things go interstellar – heavenly, or hellish. It’s one of those things that you just know when you hear it.

To better explain what I mean by ULTRAPROG, I’m going to show rather than tell. Here are a number of examples of moments in songs where things jump from prog to Ultraprog.

Please note: There will be no examples of Ultraprog moments from Tool, Yes, or Emerson Lake and Palmer. This is because these three bands seem to exist in a state of perpetual Ultraprog. It’s all they know. You can’t really take things higher or further when your starting point is so intense already!

So light some incense, pour yourself some green tea, and come along and Ultraprog with me.

Like Tool, Yes, and ELP, Mars Volta exist in a state of perpetual Ultraprog. But even so, they have their moments where they somehow make things even more insane. Like this bit, near the start of Cygnus… Vismund Cygnus, where the hyperdrive cop funk breaks down completely into a pummeling riff that has more in common with industrial machinery than music. It’s like the mysterious car on the Frances The Mute cover has passed by some roadworks, then driven into a hole. And this happens within the first three and a half minutes of a song which, by this point, has already been through at least three tempo changes. Come back guys. Music needs you.

With seven distinct sections in 23 minutes, Genesis’s opus Supper’s Ready has, by my count, six moments of Ultraprog. At 6:35, Peter Gabriel screams WAITING FOR BATTLE, and the gentle pastoral ambiance is shattered by, well, a battle. At 11:04, a hesitant whisper of a flower? gives way to the utterly absurd Willow Farm section. Not 90 seconds later, at 12:29, with a cry of ALL CHANGE things go pure musical theatre. From 15:38 to 18:54 we have nearly four minutes of sustained Ultraprog with the chugging Apocalypse in 9/8 (Co-Starring the Delicious Talents of Gabble Ratchet) section. Then at 20:05, with some triumphant tubular bells, we get a devastating refrain of the song’s main theme, which you might vaguely recall from about 20 minutes ago.

But my pick for Supper’s Ready’s defining Ultraprog moment comes at the 8:05 mark. This is the fast guitar/organ solo at the peak of the Ikhnaton and Itsacon and Their Band of Merry Men section. Play these ridiculous arpeggios to an uncompromising punk and they’ll whither like a vampire in sunlight.

Prog confession time: I don’t really like Pink Floyd’s Animals all that much. It has some wonderful moments, and it was fantastic seeing Roger Waters perform Dogs and Pigs (Three Different Ones) during last year’s Us + Them tour. But the album as a whole is dour, cynical, misanthropic, and mean. There’s very little of the dynamism, the warmth, and the wonder that makes me love Pink Floyd.

But all this changes with the penultimate track, Sheep. Roger’s vocals are just as sneering as they are throughout the rest of the album (love how they morph seamlessly into a keyboard drone during the first verse, though!). But then he concludes the album’s concept with, of all things, a happy ending. The sheep rise up, throw off their shackles, and topple the dogs and the pigs that rule them! I think. But anyway, to usher in this moment of release, which comes right at the end of a pretty exhausting album, we get a triumphant David Gilmour solo. And what a solo! It’s a rollicking slab of Ultraprog goodness!

Camel – Song Within A Song

Moonmadness has one of my all-time favourite album covers. It’s probably in my top three, along with the first Black Sabbath album and The Incredible String Band’s Hangman’s Beautiful Daughter. The whole album has a gorgeous languid feel, full of lilting flutes and gentle drums, which always reminds me of incense smoke drifting through the air. But occasionally, this pastoral prog ascends into Ultraprog.

The best moment is during the beautiful (yet awfully-titled) Song Within a Song. It starts at the 4:21 mark, and it sounds like a jolly wizard skipping through a field of purple and pink mushrooms.

The obvious choice for the Ultraprog moment in Van der Graaf Generator’s Lemmings is the 5:17 mark, where the horns and organ go pure Dalek to usher in the utterly terrifying Cog section of the song. But if a life lived immersed in prog has taught me anything, it’s that you must avoid the obvious at all costs!

So my pick for the Lemmings Ultraprog moment comes right at the start. 50 seconds into this gloomy epic a downright evil horn part flares up. It’s used as the main riff throughout the song, it sounds like dark clouds gathering on the horizon, and it’s invariably the sound that pops into my head whenever anyone utters the word prog.

We saw Van der Graaf Generator in 2008 on the Trisector tour. As they were playing as a trio, they had to play the foreboding horn parts from Lemmings on guitar. It made this already-intense song sound like apocalyptic black metal. It was astounding.

Again, the obvious choice for the 21st Century Schizoid Man Ultraprog moment is the 2:07 mark, where the proto-metal intro gives way to the jazzy tricky bit. Or you could choose 2:44, the start of Fripp’s impossible guitar solo. Seriously, it’s impossible. Look at the tab!

But we’re not going for the obvious choices here. So for your Ultraprog fix, instead head to the 4:39 mark. It’s towards the end of the Mirrors section of the song, a section that’s defined by its fast-pace and its obscenely fiddly riffs. So of course, they speed it up: Play things even faster, with heart-stopping pauses between their alien fret runs. So often when listening to King Crimson, it doesn’t feel like I’m listening to music made by people.

Rush’s Hemispheres just might be the proggiest of all the Ultraprog albums. First, look at that cover. Balletic nude prances across a giant brain in the middle of a desert, pointing an accusing finger at a Magrittesque figure! Second, consider that the album opens with an 18 minute sequel to a 10 minute song from their previous album. Then there’s The Trees, in which the guys explore the social hierarchy using an extended forest metaphor. There’s Ultraprog, then there’s Rush. This album was so out-there that they had no choice but to scale things back for their followup. Even they realised that there was nowhere else to go from here.

The album ends with, La Villa Strangiato, a nine minute instrumental whirlwind. It’s tuneful and thrilling, but it’s hard to shake the idea that this is the sound of three genius-level musicians playing at the peak of their powers just because they can. It’s hilariously, outrageously complex. Yet amid the virtuosity there’s a moment of genuine levity that makes this thing a lot more than a workout for musos. It comes as 5:49, where the building riffs unexpectedly burst into a fast-paced, future fusion cover of Raymond Scott’s Powerhouse. If you’re unfamiliar, that’s the music that’s synonymous with every crazy invention from every cartoon you ever saw. It’s wonderful.

Thanks for reading about Ultraprog!