A cosy period piece about the joys of reading! Patchy and less than the sum of its parts, The Bookshop nevertheless has much to offer.

Florence Green is a widow living in Hardborough, Suffolk. It’s 1959, and the war still casts its shadow. People are buttoned up, hesitant, reserved. Florence is tired of her insular life of reading and walking, so decides to open a bookshop. Will her new-found joy for life and her shelves of scandalous books jolt the sleepy town out of its postwar slumber? Will the written word coax these traumatised small-towners out of their shells? Maybe!

On paper, The Bookshop looks like Chocolat, but with books. But it’s an entirely different bag of nuts. Where Chocolat was warming and romantic, The Bookshop is sombre and reserved. And while Chocolat was a celebration of the finer things in life, The Bookshop seems more concerned with ideas of courage, honesty, and escape.

But there’s still a lightness here. Though many characters are tormented by grief, they often do a great job of hiding it. And for much of the film, the stakes feel very low. Mrs. Gamart is the closest thing the film has to a villain, and her notorious plan is to open an arts centre. The fiend!

This film’s greatest flaw is that it’s content to simply skim the surface. Emily Mortimer plays Florence. Her steely determination is clear from the start, but it’s never really clear just what this bookshop means to her. It’s like she’s on the defensive from the outset. But what’s she rebelling against, and why?

Similarly, Patricia Clarkson is awful as Mrs. Gamart. She’s sickly sweet, and utterly repulsive. She’s brilliant! But we simply don’t spend enough time with her. Why does she want to open an arts centre? Why is that such a bad thing? Why is she so opposed to an idea of a bookshop? How is she so influential? How does she manage to convince the entire town to conspire against poor Florence?

But amidst all this is a stunning performance by Bill Nighy as Edmund Brundish. He’s a reclusive old man who lives in a decrepit manor house filled with books. The first time we see him he’s tearing out author portraits from his books and burning them. He likes to think that his favourite authors are beyond human, and these portraits are a bit too grounded for him. The whole town views him with a mixture of suspicion and fascination. There are rumours circulating about the fate of his wife, and he’s just amazing.

But when Florence goes to visit him, he’s been alone for so long that he doesn’t seem to know how to behave around people. His voice is shaky and hesitant, and he can’t quite make eye contact. We learn a bit more about his wife and his life. It’s clear what’s being inferred, but that it’s not made explicit makes the whole scene a lot more powerful and a lot more devastating.

He develops a fondness for Ray Bradbury, and eventually plucks up the courage to confront Mrs. Gamart. That scene, and all that follows, is nothing short of heartbreaking. I wanted to reach through the screen and clutch him tight. It’s the most affecting performance by a male co-star I’ve seen since Willem Dafoe’s heroic turn in The Florida Project. I can’t stop thinking about Mr. Brundish, and I don’t think I’ll stop thinking about him for a while yet. 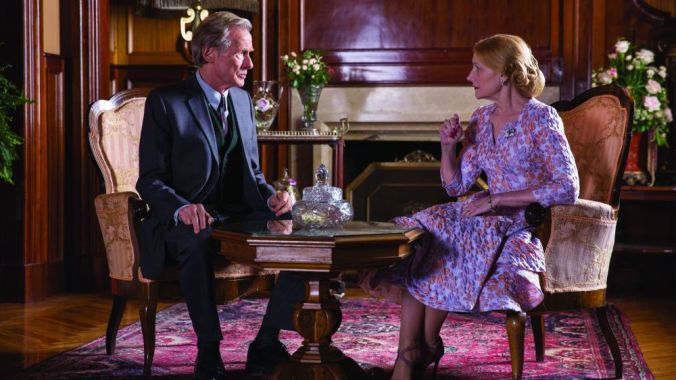 Ultimately I was left moved and frustrated by The Bookshop. The frustration is partially because tales of stubborn small-mindedness will always infuriate me. But it’s mainly because, while much of the film is remarkable, certain elements let it down so much that what could have been a truly excellent film is merely “quite good”, at best.

My main problem’s with the narration. Voice-overs in films can work, but here it’s invasive and almost entirely superfluous. It’s particularly egregious in the early scenes. Not only does the narrator tell us exactly what Florence is thinking and feeling, she also describes the weather.

The narration is eventually phased out. But whenever it returns it cuts like a knife, ruining the mood and spoiling the immersion. Once it’s revealed just who’s doing the narrating it’s a bit more forgivable. Yet still, beyond the brief introduction, removing almost all of the narration would improve the film immensely.

It’s also patchy. Mrs. Gamart isn’t the only character we could do with knowing better, but it feels as though spending more time with her would fix a lot. Because we can’t see who’s pulling the strings and why, there are numerous developments that seemingly come from nowhere.