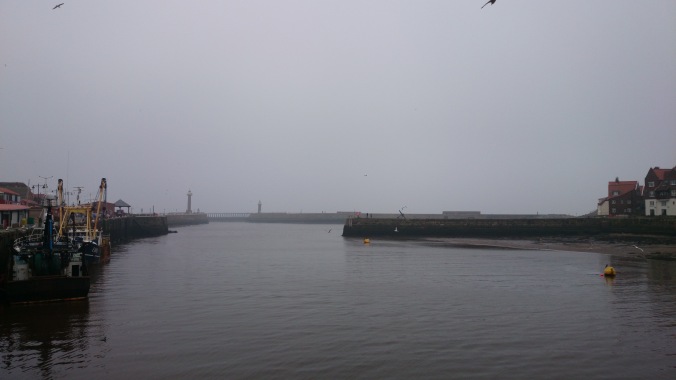 Whitby! Having been told over the past few years by a few different people that I’d love it here, I was rather keen to go. The plan was to combine a trip to Whitby with a trip to the Harry Potter Studio Tour. The plan worked! But it did involve driving from Belper to Watford. Then back to Belper. Then to Whitby. A total of nine hours or so in the car, spread across more than 12 hours, with an extended plod through an almost-overwhelming museum thrown into the middle of it all.

It was all right for me. I was a passenger; I could look out the window. But poor Alex, doing all the driving. She’s a warrior. A heroine.

As we approached the coast, a fog descended. She was driving us across unfamiliar, winding country roads. It was nearly midnight and the fog was so thick we couldn’t see a thing. Before us a sickly yellow mist. Behind us a hellish red glow, as the brake lights illuminated the impenetrable. When we got there I was knackered, so I can only imagine how past-it she was feeling. Next time you see her, buy her a pint. Or a cocktail.

There were a few more tests. The one-way system. The parking issue. The fact that we couldn’t find our accommodation. We weren’t lost per se, as we seemed to be on precisely the right street. But our accommodation simply wasn’t there. We were staying at no. 15, and the street appeared to end at no. 13. Turns out it was just around the corner, but I had to knock on a door and ask for help. Luckily a kindly old Yorkshireman pointed us in the right direction. It had seemed hopeless, but when we finally found the place, we found a complimentary bottle of wine and box of chocolates.

Things were immediately much better, but let this be a warning to the curious. If you want to go to Whitby, you might be required to pass The Test.

We passed. Just. We fell asleep almost immediately. And when we got up the next morning, we were rewarded with a beautiful bleak paradise.

Not only do I find such locations thrilling and invigorating, I also find them to be strangely comforting. Bleakness can be wonderful. Early in the morning on a cold day in March, Whitby was wonderful. 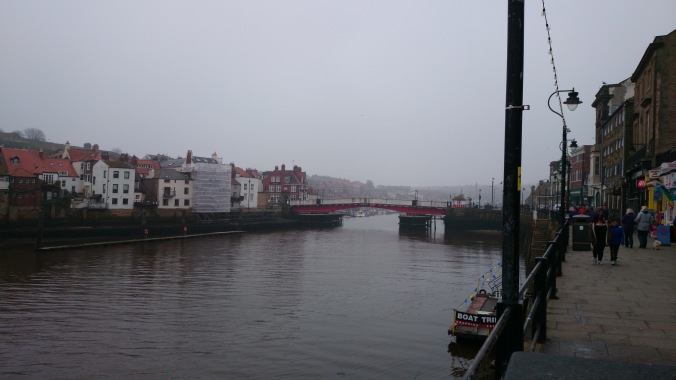 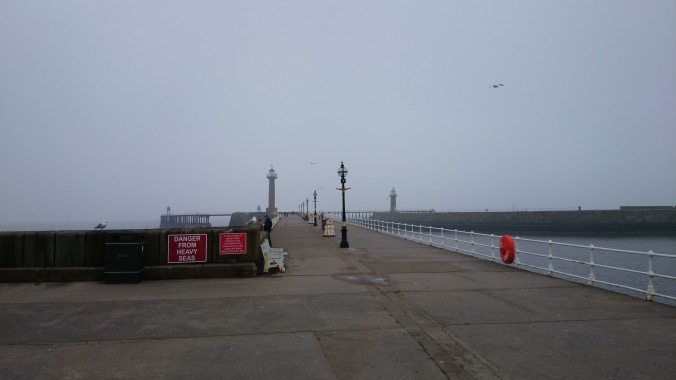 When we walked down the pier, it almost felt like we were the last people left alive.

I’ve never been taken with the idea that hell is a place of fire and brimstone. I’ve always thought of it as a place of grim repetition interspersed with cold, damp and foreboding landscapes.

It didn’t quite feel as though we were walking in hell so much as we were approaching the afterlife with a slightly unclean slate.

Beyond here lies nothing:

And then we saw a big black dog on the beach: 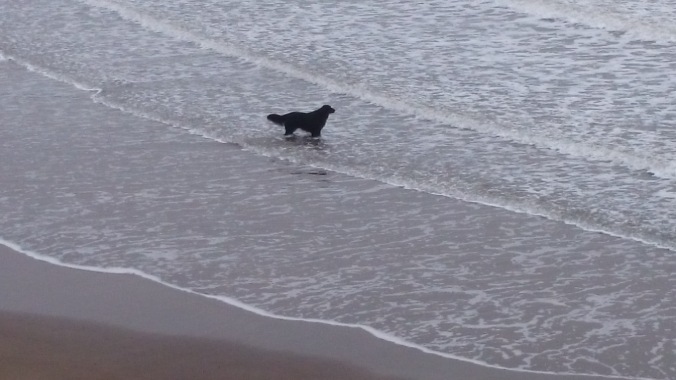 Of course, Bram Stoker set Dracula in Whitby. The Count makes his grand entrance in the form of a big black dog, running from the beach in the wake of a shipwreck. We can therefore effectively say that we saw Dracula that morning. 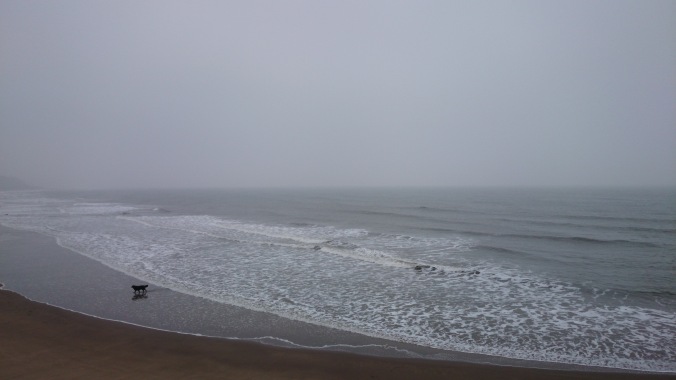 The beach was the best. You don’t need to look to the stars to feel insignificant in the face of the infinity. You just have to stand on a beach and gaze into the sea on a foggy morning.

We returned to the beach at night, and it was even better. Walking on the cold sand in almost total darkness with only the sound of the waves to guide us, I felt more alive than I have in a long time.

I did take photos of the beach at night, but I can’t seem to find them. I shall have my secretary draft an apology.

The ruins of the abbey there, overlooking the town like a grim portent of inevitable decay. We did pay a visit to the abbey, but never did it look better than it did shrouded in mist, faint yet indelible on the horizon. 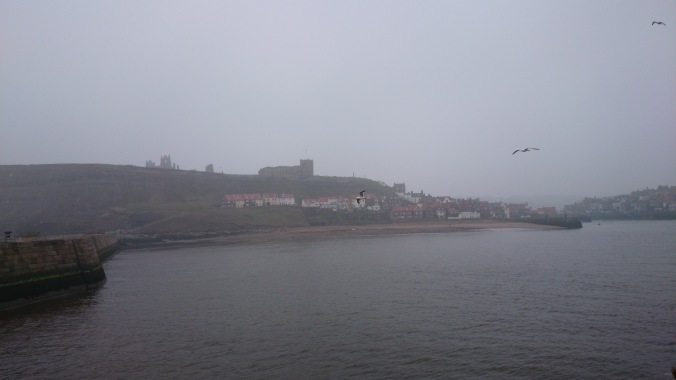 At the end of the pier were memorial benches, some of which had dying flowers attached with string. The messages were heartbreaking, and I liked to think that sat on each bench was a wistful ghost. 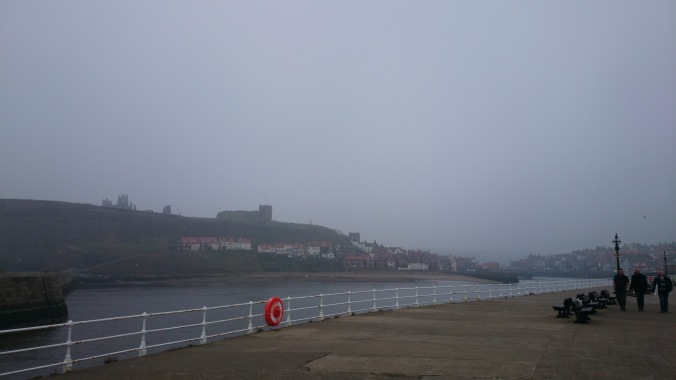 Again, we returned to the end of the pier at night, and again it was even better. There were some people stood right at the end, in a place blocked off to the public, pointing torches at the sea. I have no idea what they were doing, but it was literally dreadful.

It wasn’t all doom and gloom, though. We didn’t spend the whole weekend trying to be all gothic and poetic. We did things, too!

The Dracula Experience, New Age Shops and a futile attempt to win a Mogwai. I’ll write about those next!

2 thoughts on “Being Bleak In Whitby”